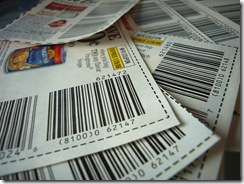 As we already know, coupons are generally pieces of printed paper that can be redeemed at retail stores for a discount or rebate on a good or service. These coupons are usually mailed and emailed to us, or even clipped from magazines, newspapers, and fliers. But does anyone know the history behind one of the greatest marketing and promotion tools ever invented?

Coupons got their start around the turn of the 20th century with the proliferation of Coca-Cola. One of the partners of the drink company, Asa Candler, wanted to promote the product nationally, but knew he needed help getting people to try it. That's when he created coupons. The company mailed hand-written vouchers to potential customers that were redeemable for a free Coca-Cola at local soda fountains. Candler provided free syrup to the soda fountains to cover the costs and soon one-in-nine Americans had tried the drink. Candler's tactics turned Coca-Cola from a regional fad into one of the most recognizable products in the world.

Soon after Coca-Cola began using coupons, entrepreneur C.W. Post created one cent coupons to help market his latest creation, Grape Nuts cereal, and other breakfast products. Post eventually amassed one of the greatest fortuned of the 20th century and is credited as a pioneer in the manufactured foods industry. Clearly, the use of coupons worked successfully for Post.

The greatest surge in coupon usage came during the Great Depression of the 1930's and 1940's. Many families were forced to use "welfare coupons" which are issued to those considered to be living below the poverty line. These vouchers were redeemable for certain food products, like milk, cheese, eggs, and other such items to help the poor meet their nutritional needs. Other depression-era families could only survive with "grocery coupons" which helped lower their weekly food bills at local markets.

Today, more than 2,800 consumer packaged goods companies offer coupons to attract customers by offering discounts on their products, which results in around $3 billion in business generated in the United States annually. The creation of the internet, and subsequently internet coupons, has drastically helped to increase the American usage of coupons. With more than 80 percent of Americans clipping coupons, the tool continues to be an excellent money saver for families and a successful marketing tactic for retailers and manufacturers.

This guest post is contributed by Angelita Williams, who writes on the topics of online college courses.  She welcomes your comments at her email Id: angelita.williams7@gmail.com.