I don't know why it seems that my interesting coupon experiences always happen at Walgreens, but that's just the way it's been lately! My favorite cashier was working again, which was nice. When I came in the door, she said "Where have you been?! It's Tuesday already, and the new ad started on Sunday! I've been waiting for you to come show me what coupons to use this week!" Notice that there are 8 Glade warmers with refills in the picture. I had gotten a raincheck a while back when they were BOGO. I had 3 BOGO coupons, and 2 coupons for Free warmers. When she entered the raincheck, though, they were ringing up $2.40 each instead of $4.79 and $0.00. I didn't notice until she started to take off the coupons, and was only taking off $2.40. I would have had to pay $2.40 for each set of two. I had to explain how they would have rung up during the sale, and how the coupon would have then taken off $4.79, making them both free. The manager came over and they manually entered the prices, and let me get all 8 of them for free. The really good part is that there is a $1 rebate on them this month, so I will make $8 on that deal! I also had some RR that were expiring, so I bought the free Energy Shots, L'oreal cleanser, 2 Oral-B toothbrushes, and another $8 worth that I can't picture because it's somebody's Christmas present! I spent $28.88, including cash and RR, and I'll got back or will get back $28.10 between RR and rebates. 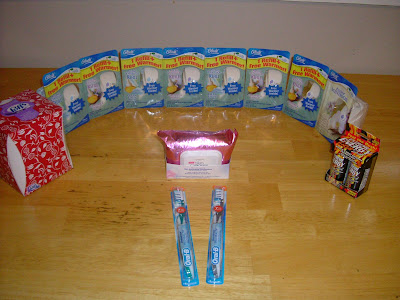 What's your story? Did you get any great deals with your coupons? Did you have any interesting experiences? Link up or leave a comment and let me know!