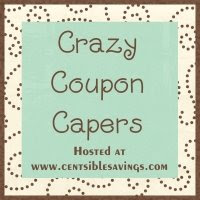 I was excited to be able to participate in triple coupons at Harris Teeter this week! (By the way, triple coupons last through Sunday, the 21st, so you still have time to get in on them yourself if you haven't already.)
I have to say that this was one of the smoothest couponing experiences that I have ever experienced. This was my fourth time being able to do triples, and I was more prepared than ever before. I always go a little later in the morning after my little boy wakes up, and I feel antsy all morning thinking that all the good deals will be sold out. According to my brother, though, it was a good thing I waited. He went earlier in the morning for his wife (great guy, isn't he?) and he called to tell me that everything that was free or that gave overage was gone. I was disappointed, but by the time I got there they must have restocked, and I got everything on my list except for one thing. My total for everything pictured was $1.89! We had a new Walgreens open up here, so I had a $3/$10 coupon from there that Harris Teeter accepted as a competitor coupon.

What's your story? Did you get to participate in triples? If not, what other great deals did you get with your coupons? Link up or leave a comment and let me know!